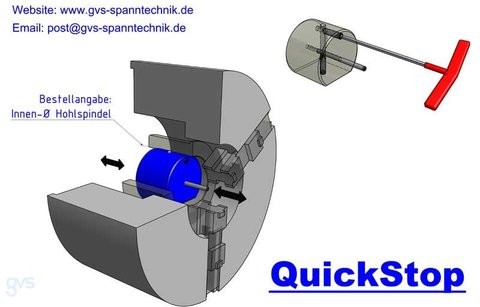 which is adjustable, lockable and movable – and can be fixed in the hollow borehole of the lathe chuck for positioning of work pieces in the Z-axis.

We also produce the QuickStop with measurements according to request. Please feel free to contact us.

The described invention is based on the problem to develop a stop which is suitable for all standard lathe chuck and thus flanges depending to diameters are not necessary.

Conventional stops are very long, sometimes more than 500 mm and at high-speed have an imbalance and make a rattling noise.

They are also not designed to stop small diameters right in the centre.

Short drilling parts which are not longer than the jaws of the lathe chuck, mostly will be positioned by a gap cut into the flange n which the different diameters of the work pieces have to be taken in consideration. Thus a number of different flanges are necessary.

Furthermore, problems occur, if the work piece is longer than the jaw and is moving in the area limit of the chuck construction height.

We solved these problems with our Quickstop and developed an innovative clamping option on the lathe.

The QuickStop consists of a basic body which corresponds to the inner diameter of the hollow borehole of the lathe chuck. This has a threaded borehole in the centre in which a screw of arbitrary length can be inserted and thus the desired length of a work piece can be determined. To avoid the axial rotation of this screw at high speed it can be

1. fixed with a lock nut or even

2. by a cross hole in which the compression spring or a similar object can be fixed by a stud screw.

This stud screw e.g. has influence to the threaded rod of the stop by a compression spring so that the stop still can be moved but cannot independently adjust itself.

Thus the somehow cumbersome countering with a nut – as described under 1. – will not be necessary.

For fixing the QuickStop into the hollow bore, one or more steel balls will that deeply be inserted in the basic body that they disappear somewhat under the diameter of the stop. By placing the ball, at the front place – in direction to the flanges – boreholes can be cut eccentrically in a way that - in case the stud screw is inserted with the cone point – the stud screw automatically will lift the ball in direction to the diameter of the hollow bore of the lathe chuck and thus fixes the stop irremovable into the desired position. This applies to all lathe chucks with different hollow bores.

Preferred fixing of the QuickStop is done by three points. This is carried out by drilling of an area at the diameter of the QuickStop whereby the first two points are resulting – and the third point is the steel ball boring. This is positioned centrally and in the opposite diameter region of the stop so that by pushing up of this certain ball these forces are directed towards the both lower edges of the area.

The lathe chuck stop is available with internal diametre of the hollow spindel of 52 mm, 62 mm or 85 mm.